Climate change seems like a problem of a far distant future. We just go on with business as usual. But, just like the loss of biodiversity and the current pandemic, climate change is the consequence of how we treat nature. Corona is a wake-up call that has disrupted all of our lives.

All attention goes towards solving the current problem: controlling the SARS-CoV-2 virus. We have to practise physical distancing, wash our hands and sneeze into our elbows. Scientists all over the globe have put tremendous effort into the development of vaccines. But prevention is better than cure. To do this, we have to look at how infectious diseases emerge and spread.

Zoonotic diseases
The SARS-CoV-2 virus is a zoonosis, an infectious disease that is transmissible from animals to humans. Other examples of zoonotic diseases are SARS, MERS, Ebola, AIDS, Nipah, Lyme disease, Q fever, toxoplasmosis, salmonellosis, swine flu and bird flu.
Not all zoonotic diseases are caused by viruses. It can also be a bacterium, like with salmonellosis or Lyme disease. Or a single-celled parasite, like in the case of toxoplasmosis, a disease that people may get via infected cat feces. Or it may be fungi, worms or prions. A prion is a type of protein that can trigger normal proteins in the brain to fold abnormally. An example of a prion disease that affects humans is variant Creutzfeldt-Jakob disease, which is related to “mad cow” disease.
People and animals can be infected with zoonoses in different ways. Zoonotic pathogens may spread through direct contact with animals or animal waste, or indirectly through food, water or the environment. They can also be transmitted by vectors, like mosquitos, flies or ticks.

Almost 100% of pandemics have been caused by zoonoses. An impressive visualization of the history of pandemics can be found here.

Insignificant part of biomass, large impact
We have wiped out entire habitats, driven species to extinction and population sizes of wildlife decreased by 60% globally since 1970. (Read more about this report on The Guardian).
For perspective: plants constitute 82% of all life on Earth. Bacteria 13%. And everything else makes up the remaining 5%. People represent just 0.01% of all biomass on Earth, scientists of the Weizmann Institute of Science in Israel calculated. Yet this 0.01% has exterminated over 80% of all wild mammals. The destruction of wild habitat for farming, logging and development has resulted in the start of what many scientists consider the sixth mass extinction of life to occur in the Earth’s history.
While over half of wildlife has been eradicated, the number of new infectious diseases cropping up each year has nearly quadrupled over the past century.
The result of decades of deforestation and the shrinking biodiversity caused by it.
While wild species die out, 60% of all mammals on earth are livestock, with 36% being humans and 4% wild animals.

Warnings
Scientists have been warning for years for the growing danger of zoonotic diseases and the effects they mave have.
In 2004 an international collaboration between WHO, FAO, OIE and the Dutch Health Council resulted in a report that describes the risks of emerging zoonoses. The authors point out that already in the early nineties a range of reports were published about the importance of renewed attention for the dangers of new infectious diseases, as was made clear by the AIDS epidemic.
In a 2007 report the World Healt Organization warned that infectious diseases are spreading around the world faster than ever and that new diseases are emerging at an unprecedented rate.
The risk of pandemics and the disruptive effects they can have on societies and economies is a topic the World Bank has been researching since years, like in this 2013 report. 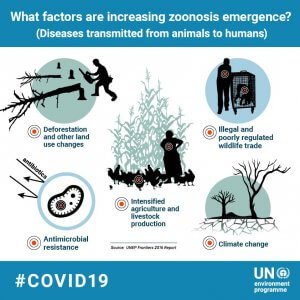 The growing world population and rapid rise in consumption have a large impact on our planet.
We are destroying forests to produce animal feed, to create pasture for cattle, or for mining, or human settlement.
Animal habitats are shrinking, leading to changes in biodiversity and disruptions of ecosystem balances. This increases the risk of the spread of pathogens. As humans increasingly encroach on their natural habitats, wild animals are coming ever closer to human habitation. More contact between wild animals, livestock and people makes it easier for pathogens to jump to humans and mutate.

Taking just one species from an ecosystem can have a significant effect on the spread of disease, as it disrupts the whole food chain. For example, when a population of predators decreases, this has an impact on the number of rodents and deer. Increasing the chances for ticks that can carry Lyme disease. Researcher Richard Ostfeld explains how this works in this article.

The risks we are taking by disturbing ecosystems are large, because in the wild there are countless animal diseases that could cause a pandemic, if just one of them jumps to humans.

H5N1 is a bird flu that occasionally infects humans when they come in close contact with infected live or dead birds. Fortunately, the virus does not infect humans easily, because if it does happen it can cause severe disease and has a high mortality rate. If such a dangerous virus were to mutate and become easily transmissible from person to person, the consequences for public health could be very serious.
H1N1 swine flu caused a pandemic in 2009.
H9N2 bird flu has caused 75 laboratory-confirmed cases of human infection since 1998, 13 of which have been reported in 2020.
H5N8 is the most recent bird flu that has made its way to humans, infecting 7 workers at a poultry plant in Russia.
H7N7 bird flu caused the death of a Dutch veterinarian during an outbreak of this highly pathogenic virus in poultry farms in 2003.

Wildlife trade also facilitates the spread of pathogens. Live animals and animal products, for example as pets, food and medicines, come into close contact with different animal species and humans through national and international trade. This makes it easier for pathogens to spill over to other species and humans. For further reading go to this United Nations report or this publication by the World Wildlife Fund.

The spillover of animal diseases to humans is made easier by antimicrobial resistance, intensified agriculture and livestock production, climate change, invasive species and international travel and commerce.
Antimicrobial resistance is growing in domesticated animals, especially in industrialized agriculture, and can increase risks of disease emergence in livestock and humans. In a report from 2019 the World Health Organization warns that, if no action is taken, drug-resistant diseases could cause 10 million deaths each year by 2050.
Climate change impacts patterns of temperature, precipitation, wind, humidity and sunshine and this can lead to disturbance of ecosystems. This can make it easier for pathogens and their hosts to reproduce and spread. For example, climate change can make conditions for mosquitos more favorable in certain places and this may enable the spread of diseases like malaria and dengue to areas where they did not exist before.
Apart from the trade in animals and animal products, the growing international travel of humans also facilitates the spread of infectious diseases, as the corona crisis has made painfully clear.

Future
Unless we take drastic measures, future pandemics will emerge more often, spread more rapidly, cause greater damage to the global economy and kill more people than COVID-19, a group of international experts of the Intergovernmental Science-Policy Platform on Biodiversity and Ecosystem Services (IPBES) of theUnited Nations warns.
They point out that the same human activities that drive climate change and biodiversity loss also drive pandemic risk through their impacts on our environment. We are in danger of entering an ‘Era of Pandemics‘, which we can still avert by putting a much stronger focus on prevention.

Lowering pandemic risk involves actions like:
– Drastically reducing deforestation and conserving habitats.
– Banning the wildlife trade. It is not only cruel, but also a threat to human health.
– But above all, we must reduce our consumption of meat and other animal products.

Act now and give our children hope for the future. There’s a world to win!