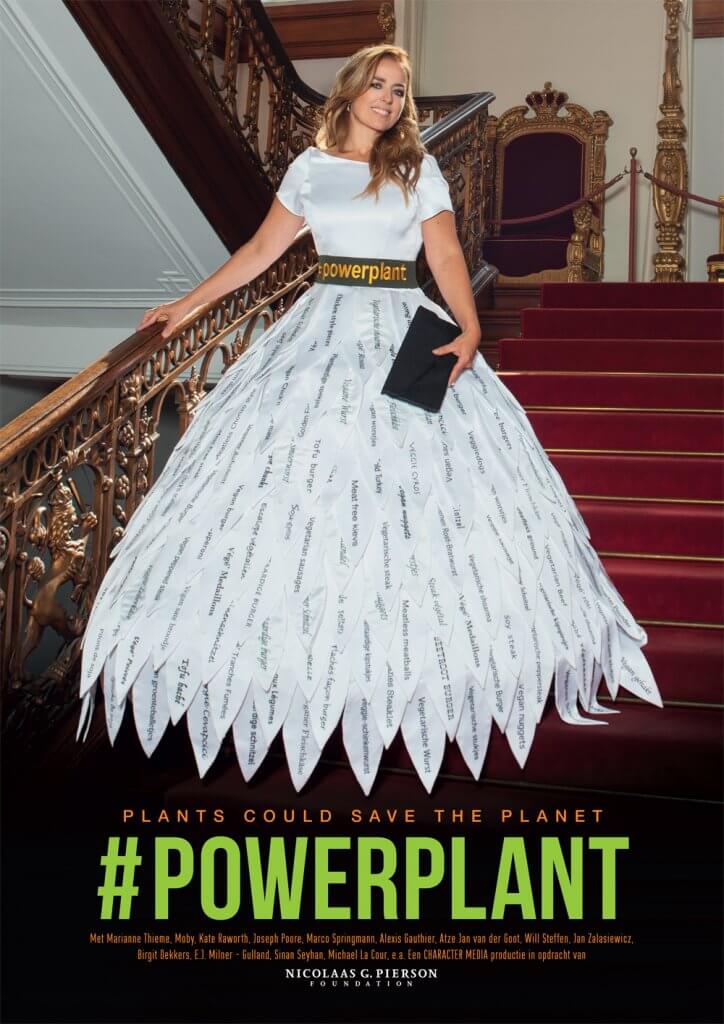 The Nicolaas G. Pierson Foundation presents its 5th documentary with Marianne Thieme. After ‘Meat the Truth’, ‘Sea the Truth’, ‘The Pacer in the Marathon’ and ‘One Single Planet’, this new documentary explores the prospects of a plant-based society.

#Powerplant provides added insight into the link between climate change and meat consumption, a topic that Marianne Thieme was the first politician to address in the climate documentary ‘Meat the Truth’ in 2007, an issue that has become even more pertinent since then. According to Oxford researcher Marco Springmann, a transition to a plant-based diet can prevent up to 8 million deaths per year in 2050 on a global scale, and can lead to savings in health and environmental damages worth up to 1,5 trillion USD (1,500,000,000,000). Adopting a plant-based menu can reduce up to 73% of agriculture’s greenhouse gas emissions and can make it possible to revert 76% of all agricultural land back to nature, says Joseph Poore, also a researcher at the University of Oxford. The study is described by The Guardian as “the most comprehensive analysis to date” in this field.

The number of scientists and government advisory bodies that stress the importance of lowering animal product consumption is increasing. In addition to speaking with Springmann and Poore, #Powerplant also shows Marianne Thieme’s meetings with top economist Kate Raworth (University of Oxford), Will Steffen (Stockholm Resilience Centre, Australia National University) and Jan Zalasiewicz (University of Leicester) about the need for a protein transition and an economy that no longer exceeds the carrying capacities of Earth in terms of resources and environmental space.

The strong rise of plant-based foods is applauded by musician Moby: “Nowadays there are more vegan restaurants in my street than you would find in the rest of the world ten years ago”. Michelin-star chef Alexis Gauthier: “This is an unstoppable movement, and as chefs, we have an important responsibility in that respect.” Michael La Cour, director of IKEA Food, firmly believes in a future in which his chain will only serve plant-based foods: “The millennials are now the ones to influence our generation. Rightly so. It is their world. There is no way back”. With its numerous stores, each with its own restaurant, IKEA ranks among the top 10 global restaurant chains.

The new normal
This plant-based optimism is also felt by researchers Atze Jan van der Goot and Birgit Dekkers at Wageningen University & Research. They are currently in the process of developing the ‘holy grail’ of meat substitutes: plant-based steak. “We have made truly enormous advances over the past decade. Many people now embrace a plant-based diet.”

Moby: “Vegans have found a way to transition from a small activist group to a mainstream movement. It is the new normal.”

The documentary is a logical follow-up to ‘Meat the Truth’, the first Dutch climate film, in which Marianne Thieme demonstrated the link between livestock farming and climate issues. Back then, research by the Institute for Environmental Studies at Amsterdam VU University already showed that if the Dutch were to adopt a single meat-free day a week, this would lead to the same reduction in greenhouse gas emissions as taking one million cars off the road.

“A vegan diet is probably the single biggest way to reduce your impact on planet Earth, not just greenhouse gases, but global acidification, eutrophication, land use and water use. It is far bigger than cutting down on your flights or buying an electric car.”

#Powerplant can now be watched in Dutch, English, French, Spanish, Portuguese, Bosnian, Italian and Arabic. Click on CC in the video player to select your language.